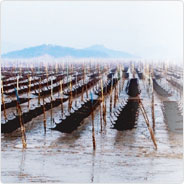 Laver is full of essential amino acid. Laver has protein, carbohydrates, ash, and lipid (in the order of content) and especially contains 44% protein . The value of protein depends not only on its amount but also on the balance of the essential amino acids.

Laver has 8 out of 10 essential amino acids including methionine. Therefore, it is very good food for consuming amino acids compared to other foods. Laver also has sufficient minerals. Mineral serves as the material for enzyme involved in the metabolism of the body and the laver has almost all necessary minerals such as phosphorus, magnesium, sodium, potassium, calcium, silicon, iron, mangan, etc.

Laver has a great amount of iron necessary for young women. Human body contains about 3g of iron and most of it is contained in hemoglobin of the red blood cells, myoglobin of the muscles, red pigment protein in the muscle cells and ferritin of the liver. 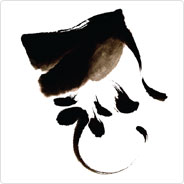 The sharply tangy taste in the mouth and the unique smell that strongly penetrates the neck and the nose remind us of the old nostalgia. Especially, the high-protein and low-fat food is effective at easing the hangover and removing the phlegm and the sticky mucus from fermentation is widely known to improve stamina. Those who try the fermented skate for the first time cannot close the mouths surprised at its tangy taste. However, the gourmet who knows about the flavor of skate come back to taste it, though it is expensive, because they cannot forget the taste.

Skates are the only fish that can be eaten by fermentation. Thus, this is the fish that can be eaten even in the deep mountain during summer. If you want to taste the real flavor of the skate as it is, try the sliced raw skate. Another special delicacy is to eat 3 kinds together; well-fermented Kimchee, boiled pork and skate together in one bite. 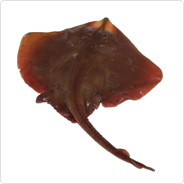 Ganiami are small fish, belonging to the species of skate and inhabiting in mud flats but also in the mixture of rocks and mud flats. They inhabit about 20m~120m deep in the sea in the wide range of the depth of the water. There are also many kinds of them. Red skates eat small fish such as shrimps, squids, anchovies, etc. The ways to distinguish rays and red skates are that rays have 1~3 long thorns in the tails while red skates have thorn-like teeth of sharks densely lined up in 4~5 lines and thin bodies compared to the thick bodies of rays.

Ganiami are nutritious food good for those who are in the recovering stage from an illness or have weak bodies. They enhance stamina and anti-cancer effects and thus are good for preventing lifestyle-related diseases. As leading recipes, there are red skate stew, red skate mixed with vegetables, sliced raw red skate, etc. and among all the other recipes, the red skate mixed with vegetables is the best and the most popular one. 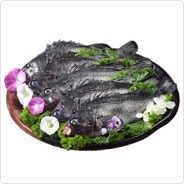 Rockfish have low tendency to move its habitats, and the flesh is tasty and popular as sliced raw fish. The hot stew mixed with vegetables is spicy and has clean flavor.
It is good at adapting itself to the environment and grows fast. It is cultivated in a large scale in the clean sea of the Heuksan area. It inhabits in the coastal rock and reef areas. Spawned and hatched in Spring, the baby fish lead floating lives for 20~30 days and then, go to live in the deep water. The young fish live sticking to physical objects such as rocks and reefs for a while and then, dig into the mud flat. Because of the tasty flesh, it has been eaten from a long time ago and because of its good adaptation to the environment, it has high potential for artificial cultivation. it is widely distributed in Korea, China and Japan and in Korea, it inhabits in rock and reef areas of the South and the West Seas.
The spicy stew mixed with vegetables has clean taste and is good for removal of hangover and as the representative dishes with rockfish, there are sliced raw rockfish, steamed rockfish, raw rockfish mixed with vegetables, and spicy rockfish stew. 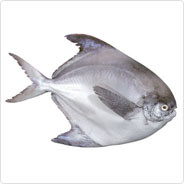 Not to mention the good taste, but pomfret has resilient flesh as if it were about to bounce and do not have the usual stench of a fish. Because of the small mouth and the thin and diamond-shaped body, it looks like tropical fish in aquarium and the pale body color gives the neat and cool impression. The white-flesh pomfret has lean flesh and thus, it tastes neat and the aftertaste is refreshing. Since it does have the usual fishy smell, those who avoid fish because of the smell can enjoy this fish and due to the lack of small thorns, children can enjoy it easily.
In addition, because of the many available recipes including roasting, frying, and boiling down, pomfret can be served in various styles so you won't be sick of it even it come up on the table often.
Especially, laying sliced season-fresh potatoes in summer on the bottom of the pot, and then, laying the plump pomfret from the spawning season with chopped fresh green peppers and then, adding seasoned hot-pepper paste, you can enjoy the boiled-down pomfret which can get your lost appetite back.
It is known to be effective for activating the intestine movement, so it is good for weak bodies and due to its detoxication effect, the personality of the person who eats the pomfret can be smoothed as well. 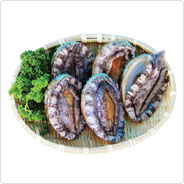 As the old royal cuisine could not be discussed without abalone, abalone has been excellent qualitatively in terms of taste and nutrition compared to other seafoods.
In the oriental medicine

According to the oriental medicine, croakers taste sweet and their natural quality is warm. Thus, they have been used to increase the energy in the internal organs that becomes cold during spring and summer and to strengthen the bones.
According to 'Jasaneobo', croakers are a little crooked and have yellowish white body with the bluish black back. They taste neat and sweet and can be enjoyed either raw or cooked. However, the dried ones are the best for health and have been used as a dietary supplement.
Because they are promptly digested and absorbed, it is known to be specially effective for children's growth and elderly patients' health recovery. The air bladders of croakers are quite expensive and when the finely chopped ones are stirred in the heat, they become beads like pearls and these are called 'glue beads' and used as materials for restorative medicine. It is good for weak bodies and fatigue recovery and stops coughing by protecting the body from being dry and prevents pyemia and controls spitting-blood, nose-bleeding, and diarrhea.
It is known to enhance memory and learning ability, prevent hardening of the arteries by lowering the cholesterol in the blood, blood-clotting, and dementia. And also to be very effective for anti-cancer activities and contain sufficient natural EPA and DHA. 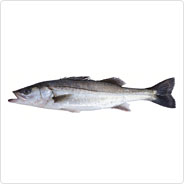 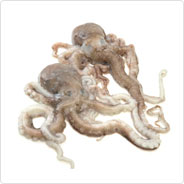 In the old days, a farmer fed octopus to a cow lying down due to the dehydration and then, "the cow stood up right away", says the story.
It seems that it emphasizes the point that octopus is so good to stamina.

Octopus is effective to prevent the cholesterol and due to its lack of fat, it is especially good for female's skin care.
In addition, taurine, one of amino acids, is largely contained and it makes the blood clean, helps to develop child's growth, especially the growth of the brain, prevents lifestyle-related diseases and is good for reinforcement of intestines and pancreas, and metabolism.

The majority of live octopus is protein and especially, it has a great amount of essential amino acids, so that it is very nutritious. Amino acids constituting proteins are like the current running in a battery and they serve the delivery function in the human body. Because of taurine, protein, calcium, phosphorus, iron and vitamins, it is effective at controlling the amount of cholesterol and preventing anemia. 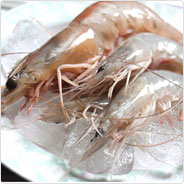 Shrimps turn red when boiled or roasted and it is because the pigment protein called astaxanthin contained in the shell turns red when heated.
The king shrimps produced in the west sea are caught a lot in the clean sea of Shinan county and with the low salt concentration, the shrimps tastes better than the ones caught in the other areas. Thus, it is very popular as raw fish or for roasting with salt.
The king shrimps are raised by inputting the baby shrimps in the sea in May, raising them as big as 10~20cm and harvesting them from the end of September to the middle of November. It is known to include a great amount of protein and chitosan effective at the prevention of cancer and thus, is very popular for a healthy food.
It is known to be excellently effective at the prevention of skin aging, the removal of foreign substances inside the body, and the prevention of various lifestyle-related diseases including high blood pressure and its sufficient vitamins are good for children's growth and development and skin care. 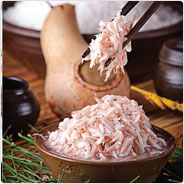 Depending on the spawning period, paste shrimps are divided into shrimps passing winter (winter shrimp) and shrimps passing summer (summer shrimp).
Paste shrimps die one month after the spawning and these shrimps are of the same kind but have different lives.
Winter shrimps spawn from the end of July to early October, stop growing from December to March next year, start the growth from April, spawn from May to June in lunar calendar and then, die.
Summer shrimps are the paste shrimps that have passed the winter and spawn from early May to early July and during the summer, because of the high water temperature, they spawn from the end of July to early October and then die.
Ohjeot and yukjeot, people's favorites, are the salt-pickled shrimps that are caught in May or June in lunar calendar, after passing winter, right before the spawning and thus are full of eggs.
The salt-pickled shrimps help the digestion of food and when eaten with pork, they do not cause any upset stomachs. They are mainly used for making Kimchi and Kimchi made with the salt-pickled shrimps tastes excellent. 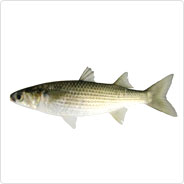 The best season for gray mullet, known for its clean and chewy taste, is between November and January.
Its dorsal area is grayish blue and the stomach area is silver white and it has firm scales and blurry eyes.

The gray mullets caught in the clean sea of Shinan county taste clean because they grow in the flavored and nutritious mud flats.
Gray mullets inhabit in the less salted area where fresh water and sea water meet and most of them are natural and some are cultivated. The ones belonging to Family Mugilidae, Order Perciformes are gray mullet, mugil japonicus, chelon affinis and mullet and the pushing mullet is a dialect of Bongam-island. It is a good food for those who lack nutritions and is full of Vitamins B1 and B2 to be effective with the restoration of cells and the prevention of aging.