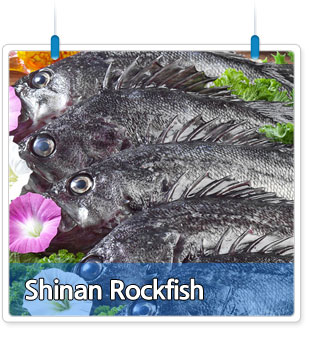 Rockfish produced in the clean sea of Heuksan area

Rockfish takes up 90% of Korea's marine fish aquaculture along with flatfish and because of its firm and chewy flesh, it is popular to Koreans. It is effective for fatigue recovery, improvement of liver function and prevention of aging.

Rockfish have low tendency to move its habitats, and the flesh is tasty and popular as sliced raw fish. The hot stew mixed with vegetables is spicy and has clean flavor.

It is good at adapting itself to the environment and grows fast. It is cultivated in a large scale in the clean sea of the Heuksan area. It inhabits in the coastal rock and reef areas. Spawned and hatched in Spring, the baby fish lead floating lives for 20~30 days and then, go to live in the deep water. The young fish live sticking to physical objects such as rocks and reefs for a while and then, dig into the mud flat. Because of the tasty flesh, it has been eaten from a long time ago and because of its good adaptation to the environment, it has high potential for artificial cultivation. it is widely distributed in Korea, China and Japan and in Korea, it inhabits in rock and reef areas of the South and the West Seas.