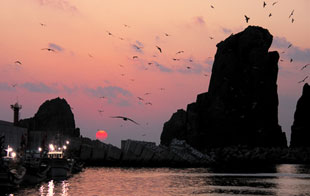 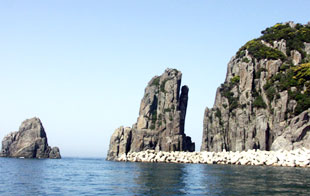 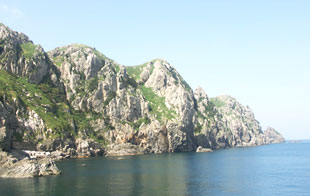 Gageodo Island, a pure land at the southwestern end of the country
Gageodo Island, located at the southwestern end of the territory of Korea, 127 degrees 7 minutes east longitude and 34 degrees 4 minutes north latitude, is 145km away southwest from Mokpo. Gageodo Island, an island of cliffs with high mountains stretches toward the southwest with Mt. Doksil(639m), which is the highest mountain in Sinan-gun, at its center. Its magnificent and mysterious scenery radiates masculine beauty. The area is 9.18㎢, and the length of coastline reaches 22㎞. Mt. Doksil, which has a longish shoreline and always seems floating on the sea holding the clouds above the steep shore cliffs, emanates a curious mystique that is hard to express. 'Soheuksando Island', an alternate name for the island, is the name called during the Japanese colonial period. In the old days, it was called 'Gagado', which meant 'a beautiful island', and from 1896, it was named 'Gageodo' meaning 'a liveable-enough island'.

Gageodo Island, where the seasonal fish markets open sometimes when the fishing boats crowd in from the neighboring East China Sea to escape high winds or rainstorm, is a forward base of fishery in the southwest sea, and plays the role of the advance guard that defends the territorial waters of Korea.

Gageodo Island, which is entirely a habitat for the silver magnolia, is full of the silver magnolia, daphniphyllum macropodum and thyme growing thick, and the medicinal herbs with rarity, such as epimedium koreanum, figwort, moutan and pueraria, are growing naturally. It also is a paradise in the nature where the unusual birds like black wood pigeon, which is a natural monument, chinese pond heron and blue rock thrush are living.

Gageodo Island is an attractive place where enjoying both of mountain climbing and fishing is possible.