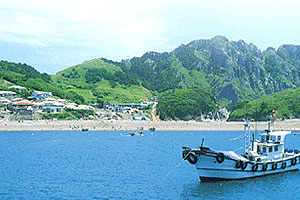 The purest land in the national territory

Transferring ships at Heuksando and going for 2 hours in the sea, visitors will find several islands floating in the middle of emerald sea.

Since the islands are far from the land and are windy, people do not rush to these islands. Thus, the nature of Taedo is preserved as it was in the older days and it would be such a surprise that we still have this kind of place left in Korea which is that beautiful.

The water is clear and the depth of the water is deep. The fast water from the south and that from the west are exchanged frequently. Thus, all the fish in the west sea and south sea gather here. All the fisheries in Taedo are natural. Since it is located in the corner where the west sea meets the south sea, the water flow very fast. Thus, aqua-cultivation cannot be dreamed of. However, seemingly to compensate this natural environement, there are so many natural rock lavers on the seashore rocks around the islands.

The name of Taedo was originated from the fact that there are so many rock lavers (Seok Tae). Taedo is full of rock lavers, natural seaweed, abalones, giant octopus, sea plants, fish, and shellfish. Thus, there are so many female divers collecting seafood. Female divers in Taedo collect rock lavers, rock seaweeds and tot in the seashore rocks appearing out of the water during ebb when not diving. These female divers' income by diving and collecting seaweeds can be said to be the total income of Taedo where agriculture is not done at all.

Among the coasts of Taedos full of cliffs, there is sand field in HaTaedo. It is a short sand beach with less than 300m but has such a humble and pure beauty like virgin trees and its beauty cannot be compared with any of the renowned sandy beaches. There are small sand dunes near the sandy beach of HaTaedo and a shine surrounded by forest is on the top of the sand dune.

Surrounded by endless sea, people of Taedos who have to entirely depend on the great nature for their whole lives are very sincere to serve the nature and conduct a ritual at the shrine to the nature deity. Every year, for 3 days from the new year's day, they have the ritual with the offerings and pray for good fish harvests and no disasters. After the ritual ceremony, they make and send puppets to the sea.

Taedo that preserves the beauty of the unspoiled nature is not well-known to the public. But it is a blessed fishing spot where fish from the west and south gather. The entire island is a great spot for fishing. Famous spots are Ganyeo of HaTaedo, Keunyeoseom and Gangseom.

From early summer to October, breams and sea basses are in season and from early October, yeolgi and rockfish are in season. From the middle of November until March, black sea bream is in season and the full-fledged fishing season starts. Fishing goes well whether on seashore rocks or on the boat and it is a fantastic fishing spot that enables fishers to catch big-sized black sea breams over 60cm.

Fishing spots in Taedo have unspoiled natural environment and in an effort that the residents attract more visitors for fishing, they do not set up nets within 200m from the shore. In addition, each fishing spot is connected along the coast and can be easily and safely accessed to the land. In places that are far away from the main islands and tides are fast, fishing goes well between 12-mul and 2-mul and in the coast of Mangokjin of the main islands, generally it is good between 5~10-mul. Depending on the fishing spots, ebb time is good but in general, early rising tide time is good for fishing.